You are here: Home / Reviews / Book Reviews / The Man Behind Ripley’s Believe It Or Not (Book Review)

The Strange and Brilliant Life of Robert Believe It or Not! Ripley 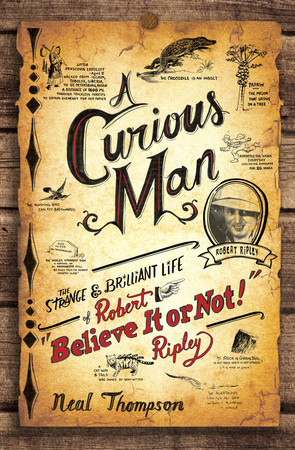 My husband and I married in Myrtle Beach, South Carolina.  The vast majority of family and friends thought we traveled on to another location for our honeymoon, but we didn’t need much but each other and a beautiful expanse of beach so we just moved down the road to a new hotel for some privacy.  During one of our many strolls, we encountered “Ripley’s Believe It Or Not.”  As we wandered through the museum featuring unique anatomical formations and fascinating abilities, I wondered about the man behind this vast collection.  I was delighted when the biography of Ripley appeared in my review list!

Author Neal Thompson introduces Ripley as a socially awkward youth with few friends and malformed teeth.  His social awkwardness is hypothesized to be the impetus leading him on a career gathering the unique and far from ordinary.  It is believed he felt a kinship with those different from the norm and looked to celebrate differences the general public might consider freakish; although, some would charge him with monetizing others’ misfortune.  Alcoholism and issues with women are recurring troubles in Ripley’s life and thus, are repetitively discussed in the text.  Like his father, he leaves this world prematurely, but leaves behind a powerful legacy.  There are very few in this world who can claim to be truly ignorant of Ripley’s Believe It Or Not.

I am typically a very fast reader, but for some reason this book took me longer than average to finish.  Certainly, my two littles could have contributed to the prolonged reading time, but I also wonder if the large number of proper nouns; names, places, and things were my undoing.  The best part of this book is the author’s uncovering the many connections and alliances that Ripley utilized in his personal life and career to achieve success.   The relationships Ripley had to other famous and infamous historical characters is incredible.  Some of my favorite trivia included:

If you are interested in Ripley’s life I suspect you will greatly enjoy this read.  The text is engaging and propels the reader through the chapters.  At certain points in the book, reading is more laborious and time intensive, but given the vast amount of credible information I believe most readers will find their effort and time well spent.

A Curious Man is the marvelously compelling biography of Robert “Believe It or Not” Ripley, the enigmatic cartoonist turned globetrotting millionaire who won international fame by celebrating the world’s strangest oddities, and whose outrageous showmanship taught us to believe in the unbelievable.  Ripley delighted in making outrageous declarations that somehow always turned out to be true—such as that Charles Lindbergh was only the sixty-seventh man to fly across the Atlantic or that “The Star Spangled Banner” was not the national anthem. Assisted by an exotic harem of female admirers and by ex-banker Norbert Pearlroth, a devoted researcher who spoke eleven languages, Ripley simultaneously embodied the spirit of Peter Pan, the fearlessness of Marco Polo and the marketing savvy of P. T. Barnum.
About the Author:

NEAL THOMPSON is the critically acclaimed author of Light This Candle, Driving with the Devil, and Hurricane Season and has contributed to such publications asOutside, Esquire, and Sports Illustrated. He lives in Seattle with his wife and two sons.  You can find him at www.nealthompson.com.