I received this book for free from WaterBrook Multnomah Publishing Group for this review. 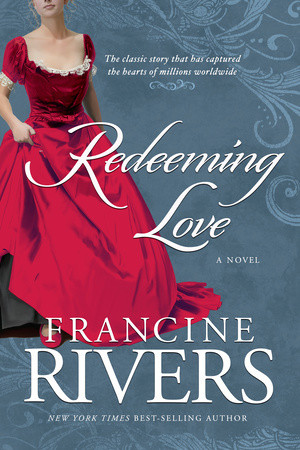 Michael Hosea, the leading man in Redeeming Love by Francine Rivers, is a strong and virtuous masculine character rarely seen in today’s historical and contemporary romance.  He’s handsome, handy, devoted, and a passionate disciple of Christ.  Michael is a man that is almost too good to be true and sadly, Angel sold into prostitution at a young age, struggles with believing that he is genuine in his intentions and actions.  Michael is called to care for Angel, not as charity or as a Christian cause or project, but as a woman meant to be loved and joined as his wife.

This novel, set in California’s gold country, 1850 is based on the story of Gomer and Hosea.  Times were hard and people did what was needed to find food, shelter, and survive.  Michael and Angel do not come to love easily.  Michael is called to love and marry Angel by God despite his misgivings and apprehensions, while Angel has to fight to overcome all the harsh realities she knows to love and trust him as a wife should a husband.  The strength of Michael’s and finally Angel’s love is awe inspiring and raises the relationship portrayed in this novel above most encountered in today’s modern romances.

Reasons to Read: Redeeming Love is a powerful read with intense characters; Angel fierce in her independence and will to survive and Michael profound and unshakable in his faith and beliefs.  There are parts of this novel that left me breathless at the true commitment of Michael to his Father and his calling to love Angel.  The novel is at once inspiring and entertaining; an overall great read.  A six-part reading group guide is also included to help process the message of God’s love and to provide a resource for those wishing to enjoy this book via a book club.    I highly recommend this novel as one you will likely enjoy and remember for sometime to come!

Reasons to Pass:  Totaling over 400 pages, Redeeming Love is a long novel and easily could have been divided into multiple books to create a series.  There are uncomfortable scenes describing inappropriate sexual contact with minors that can be especially challenging to read.  There are moments when the main male character, Michael is almost overwhelmingly good, making the story hard to accept, but if you have the experience I did reading the book, you’ll find yourself wanting him to be real.

Suggested Rating:  PG-13  This is a Christian romance and the author does not go into unnecessary or graphic detail, but adult content including prostitution, violence, and sexual contact with a minor are intimately intertwined with the primary themes of the novel.

Redeeming Love is celebrating its 20th Anniversary in print and is available through WaterBrook Multnomah Publishing Group in hardback and paperback editions.  A Kindle edition is also available on Amazon.

From 1976 to 1985, Francine Rivers had a successful writing career in the general market, and her books were awarded or nominated for numerous awards and prizes. Although raised in a religious home, Francine did not truly encounter Christ until later in life, when she was already a wife, mother of three, and an established romance novelist. Shortly after becoming a born-again Christian in 1986, Francine wrote Redeeming Love as her statement of faith. This retelling of the biblical story of Gomer and Hosea set during the time of the California Gold Rush is now considered by many to be a classic work of Christian fiction. Redeeming Love continues to be one of the Christian Booksellers Association’s top-selling titles, and it has held a spot on the Christian bestsellers list for nearly a decade.

Since Redeeming Love, Francine has published numerous novels with Christian themes–all bestsellers–and she has continued to win both industry acclaim and reader loyalty around the globe. Her Christian novels have also been awarded or nominated for numerous awards, including the RITA Award, the Christy Award, and the ECPA Gold Medallion. In 1997, Francine was inducted into the Romance Writers of America Hall of Fame. Francine’s novels have been translated into over twenty different languages, and she enjoys bestseller status in many foreign countries including Germany, The Netherlands, and South Africa.

Francine and her husband, Rick, live in Northern California and enjoy the time spent with their three grown children and every opportunity to spoil their four grandchildren. She uses her writing to draw closer to the Lord, and that through her work she might worship and praise Jesus for all He has done and is doing in her life. Visit Francine online at www.francinerivers.com.

If you read or have read Redeeming Love, please stop back by and let me know what you thought.  I’d love to hear from you!

All in Good Time by Maureen Lang

A Love Story How God Pursued Me and Found Me: An Impossibly True Story by Samantha Ryan Chandler