You are here: Home / Reviews / Book Reviews / Romance and Recipes: A Table by the Window by Hillary Manton Lodge (Book Review)

A Table by the Window 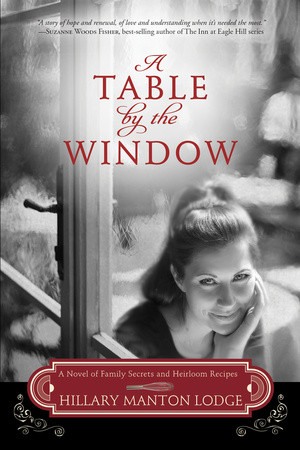 Many thanks to the author and Blogging for Books for providing me a free copy of this novel in exchange for my honest review.

Juliette, a young Italian food critic has always wanted her own restaurant to run and her brother Nico offers her that opportunity.  Her unlikely and unexpected online romance with a Tennessee based immunologist offers the possibility of true love.  Her writing career is just taking off in directions that make her nervous, but popular with her publisher.  Sadly, her current career and romantic ambitions are in direct opposition with her restaurant dreams.  As Juliette’s emotions dance through her many life challenges she experiments with multiple recipes, often from her grandmother’s cook book.  One of these recipes is printed at the end of each chapter.

A delightful, light-hearted read, A Table by the Window entertains readers with an easy going love story complimented by mouth watering old school Italian recipes.  At times it feels as though a key ingredient is missing in this novel and the story line and characters occasionally fall a little flat.  The sincere dedication of the author to be true to her characters and her honest, thought provoking plot; however still result in an ending that implores the reader to continue reading the next book in the series.  Even if you don’t keep this book for your bookshelf, the recipes may make it a keeper for the kitchen.

The youngest heir to a French-Italian restaurant dynasty, food writer Juliette D’Alisa has spent her life negotiating her skill with words and her restaurant aspirations. When her brother Nico offers her a chance to open a restaurant together, she feels torn—does she really have what it takes? Should she risk leaving her journalism career?After the death of her grandmother, Juliette discovers an antique photograph of a man who looks strikingly like her brother. As the truth behind the picture reveals romance and dark secrets, Juliette struggles to keep the mystery away from her nosy family until she can uncover the whole story. Inspired by her grandmother’s evolving story, Juliette resolves to explore the world of online dating. To her surprise, she finds a kindred spirit in Neil McLaren, a handsome immunologist based in Memphis, Tennessee. With a long-distance relationship simmering, Juliette faces life-shifting decisions. How can she possibly choose between a promising culinary life and Neil, a man a world away in more ways than one? And is it possible her Grandmother’s story can help show the way?

Hillary Manton Lodge is the author of Plain Jayne, a Carol Award Finalist, and Simply Sara, an ECPA Bestselling book. A graduate of the University of Oregon’s School of Journalism, Hillary discovered the world of cuisine during her internship at Northwest Palate Magazine. Her latest novel, A Table By the Window, will release in May of 2014 from WaterBrook Publishing Group.At an early age, Hillary decided on royalty as a career path. A storyteller at heart, she admits that publishing is plenty exciting, and marriage to an engineer results in a less complicated in-law situation. In her free time, she enjoys experimenting in the kitchen, watching foreign films, and going on motorcycle rides. She and her husband live in Richland, Washington.

All in Good Time by Maureen Lang

A Love Story How God Pursued Me and Found Me: An Impossibly True Story by Samantha Ryan Chandler